To unlock the full value of vast amounts of data at the edge, in the core and in the cloud, today’s focus is on architectures with high throughput and extremely low latency over large volumes of data. The growth of time-critical web applications like fraud prevention, recommendation engines, ad exchange and stock trading has created demand for high-performance, real-time databases, like the Aerospike NoSQL Data Platform.

This focus on faster architectures challenges traditional storage technology. Aerospike, a NoSQL database optimized for flash technology, has found that not all solid-state drives can handle the high volume of transactions. Even for those SSDs rated for 100K+ reads/writes per second, the actual load they can withstand for sustained periods of time is generally much lower in production, past the 4- to 12-hour mark.

Aerospike developed and offers ACT, a certification tool to assess SSDs in high-throughput tests. These tests have shown that the performance of read latency under sustained write load is most critical. And low latency is vital for these high-volume, real-time applications.

Why Micron Storage Technology for Aerospike?

The Aerospike database is highly optimized to run on flash and SSD devices. Micron offers two high-performance storage technology solutions, both of which leverage the high throughput of NVMe™ for Aerospike-based applications: 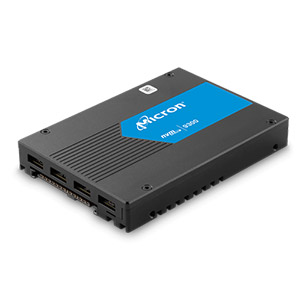 For PCIe/NVMe-based flash: The high-performance Micron 9300 SSD with NVMe is among the fastest flash-based SSDs on the Aerospike certifications list and a great match for performance-focused workloads. The Micron 9300 delivers industry-leading sequential write performance with some of the lowest average write latency of any NAND-based SSD on the market. 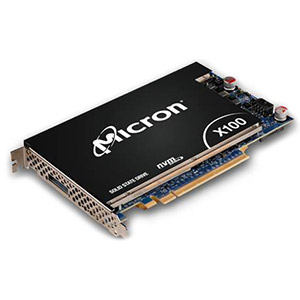 For PCIe/NVMe-based 3D XPoint: One of the fastest SSDs in the world, the Micron X100 SSD with NVMe provides game-changing performance for big data applications and transactional workloads. With its new 3D XPoint nonvolatile technology and an x16 Gen3 PCIe interface, the Micron X100 demonstrated superior performance* across a variety of workloads compared to the fastest NAND-based SSDs certified for use with Aerospike.

Groundbreaking Latency: The Micron X100 achieved 8GB/s of storage throughput at 19µs of latency and far outperformed the NAND-based SSDs in benchmark operations per second at dramatically lower latency, with up to 10x improvements in 99.9% latency along with more than 2x higher database ops/s.

In addition, the X100 shows lower tail 99% and 99.9% latency across nearly all the tested workloads and uses half the CPU/power resources with far greater power efficiency.