Exciting times in server technology! I joined an enthusiastic crowd and impressive set of AMD customers for the launch of the AMD EPYC™ 7002 series processors, the second generation of server processors based on the ‘Zen 2’ architecture. AMD claims that its EPYC 7002 processors, which were designed to leapfrog server technology, set 80 new world records for CPU performance across a wide range of workloads at launch.

In a distinctive departure from most processor launches, AMD highlighted workload performance, not just speeds and feeds, by including its ecosystem of partners and OEMs. AMD’s workload focus aligns with how we approach storage solutions at Micron and provides a customer-centric view of the markets that AMD supports. Many of these highly performant workloads included Micron as an integral part of in the solution. Micron storage and memory accelerated performance of the AMD EPYC 7002 series processor in several workloads. For example, AMD reported impressive performance by its top-of-the-line EPYC™ 7742 processor in the following environments

The AMD EPYC 7002 Series Processor is different and better

This new generation of server processor continues to deliver a revolutionary single-socket approach – offering the performance of dual socket at single socket economics. The AMD EPYC 7002 processors have between 8 and 64 physical cores, plus up to 128 Simultaneous Multi-Threading (SMT) process threads, in single or dual socket configurations. They also have up to 256MB of L3 cache per processor and are the first x86 data center CPUs to support PCIe® 4.0 and its faster bandwidth.

With 128 lanes of PCIe® 4.0 available in a single socket solution, the 2nd Gen AMD EPYC processor is an ideal match for the new, high performance Micron 9300 NVMe™ SSDs. Both AMD and Micron highlight continuous innovation for data-centric workloads such as database applications, big data analytics and software-defined storage solutions. 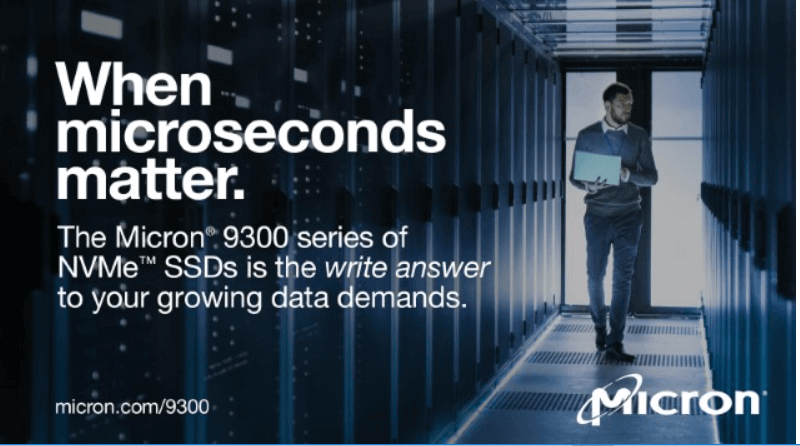 Micron got a vote of confidence when AMD requested our Micron High-Performance 9300 SSDs with NVMe™ for the EPYC 7002 series processor media testing kits and the client sample kits. GIGABYTE, for example, has already announced new servers with the Micron 9300 SSD for storage on EPYC 7002 processor servers. These drives deliver up to 15.36TB of usable capacity, enabling more data to be cached from NVMe storage near the CPU. And with 3.5 GB/second of bandwidth for both sequential reads and writes, the 9300 SSDs can parallelize some processes, making workloads deliver twice as fast as a single thread.

The Micron 9300 SSD offers large capacities and up to 32 NVMe namespaces, so enterprises can tailor their deployments more efficiently for maximum storage use. Simply put, our 9300 SSDs enable more users and transactions per box.

We tested this solution, using the AMD EPYC 7002 series processor with RHEL and Ubuntu, and found even better results than we had reported earlier in the Micron 9300 SSD datasheet, which used multiple OEM non AMD processor based servers. Using RHEL random write IOPS increased 15% due since the additional cores/threads increased the drive queue depths

Plus, Micron is releasing our first 64GB 3200 MT/s RDIMMs (MTA36ASF8G72PZ-3G2B2) for the data center in anticipation of the improved workload and application potential in the new 2nd Gen EPYC processor based servers. These were the memory models used in many of the performance tests. Not only are the new Registered DIMMs faster, but they also double the density of our previous generation of RDIMMs due to being built with 16Gb die. Check out Micron DDR4 workloads discussed by Eric Caward in his EPYC blog.

An enthusiastic and engaged ecosystem

As someone leading ecosystem development at Micron, I salute AMD’s focus on working with a vast ecosystem, spanning OEMs, ODMs, CSPs, end customers, ISVs, and IHVs, like Micron. It was an impressive crowd that gathered at the launch, but even more impressive were the results that AMD revealed at the event. Analyst Patrick Moorhead noted some of the key players in his Forbes article called, AMD And Its Partners Deliver Big At 2nd Generation EPYC Datacenter Launch.

Look for more to come on this exciting topic. Stay up to date with Micron by following us on Twitter @MicronTechnology and connecting with us on LinkedIn.

All information herein is provided on as “AS IS” basis without warranties of any kind, including any implied warranties, warranties of merchantability or warranties of fitness for a particular purpose. Micron, the Micron logo, and all other Micron trademarks are the property of Micron Technology, Inc. The EPYC and AMD are marks, logos and designs of Advanced Micro Devices, In. and are used by permission. All other trademarks are the property of their respective owners. Micron assumes no liability for lost, stolen or corrupted data arising from the use of any Micron product, including those products that incorporate any of the mentioned security features. Products are warranted only to meet Micron’s production data sheet specifications. Products, programs and specifications are subject to change without notice

Micron, WEKA, AMD and Supermicro teamed to test a cutting-edge AI storage solution. This solution took advantage of the best in bleeding-edge hardware and software and used a new benchmark to measure its ability to support demanding AI workloads.
Read more >